This is a tutorial to setup Bureaurcrat and Swagger API documentation with an Elixir project. The only way to make sure documentation stays up to date is to generate it automatically. Since Bureaucrat is a popular ruby tool, I will briefly cover Elixir then dive into code.

Elixir is an efficient, readable, and scaleable language; perfect for building an API. It is designed to be fault tolerant, using individually silo’ed processes to prevent isolated errors from causing app-wide errors. The most popular framework to build application in Elixir is Phoenix, which is designed to feel just like Rails. Elixir compiles to erlang, which is an (relatively) ancient language which first appeared in 1986 per wikipedia. It took 30 years to figure out its value, but now with its fresh Elixir wrapper and Ruby-ish syntax it is has become a cornerstone of large companies everywhere.

I will leave the details about just how much faster/more efficient Elixir is than Ruby to more qualified professionals, but wanted to briefly introduce the subject for readers who might not have the background.

Bureaucrat is a dependency you can add to your Phoenix project which will use your tests (yes, you have to write tests…) to automatically compile api documentation. As endpoints are added or changed, this handy tool will re-generate markdown (or HTML with some customization) so nobody has the unenviable task of making sure documentation is up to date.

The package lacks proper documentation and following the readme on github will inevitably lead you astray. That confusion is what inspired me to take a moment to organize my thoughts here in hopes that it helps someone else avoid some rather annoying shortcomings.

Bureaucrat can write basic markdown with the simple built in markdown writer. The configuration looks as follows:

Now, all we need to do is add a documentation call to endpoint tests which we want to be documented, and our basic documentation is done!

Any file saved in the destination folder with _intro will automatically be included at the head of the output file, so you can customize a bit.

This is as good as it gets with Bureaucrats built in markdown writer. 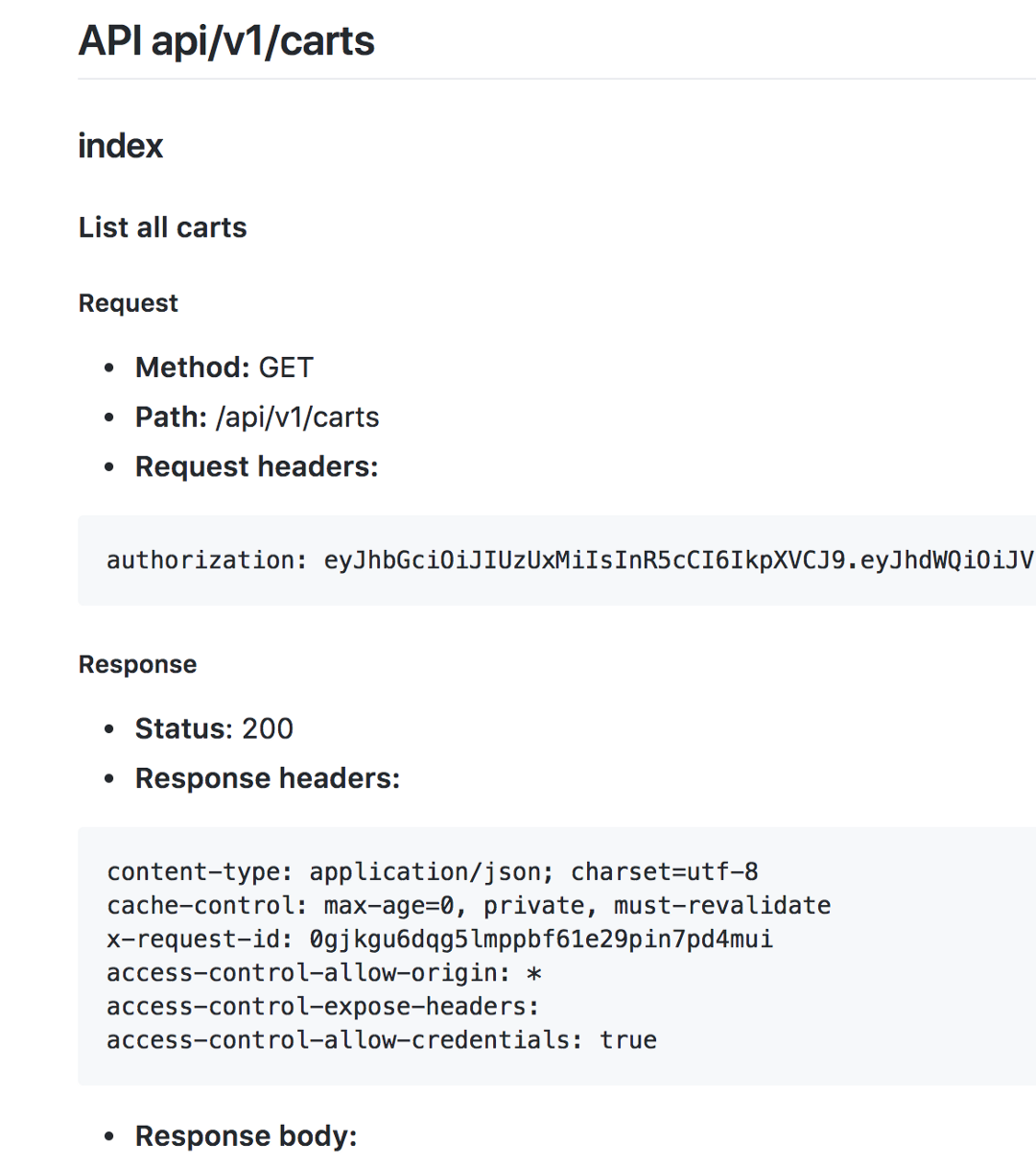 Bureaucrat with Swagger and Slate

Bureaucrat offers a second option to generate documentation with SwaggerSlateMarkdown writer. The configuration of this approach looks something like this:

Swagger follows open API syntax, or generally accepted language to document the purpose and use of an API. PhoenixSwagger allows us to populate this metadata in our controllers and execute a command to generate the swagger.json file. Steps to install can be found at the link above, but here is an example of how it is used.

We can also define Schemas, so I can simply tell users I will return them an array of Carts and link to the structure of a cart if they are curious.

These data models are nicely hyperlinked in the output. Assuming everything is properly configured, you can update your swagger.json file by tweaking this script for your project and running.

The next step is taking that json and transforming it into a beautiful interactive document.

Slate depends on ruby, bundler, and middleman. This can cause a hickup in the deployment process for some, but for most is just a onetime inconvenience.

The output is a clean and interactive document any developer would be happy to work with. 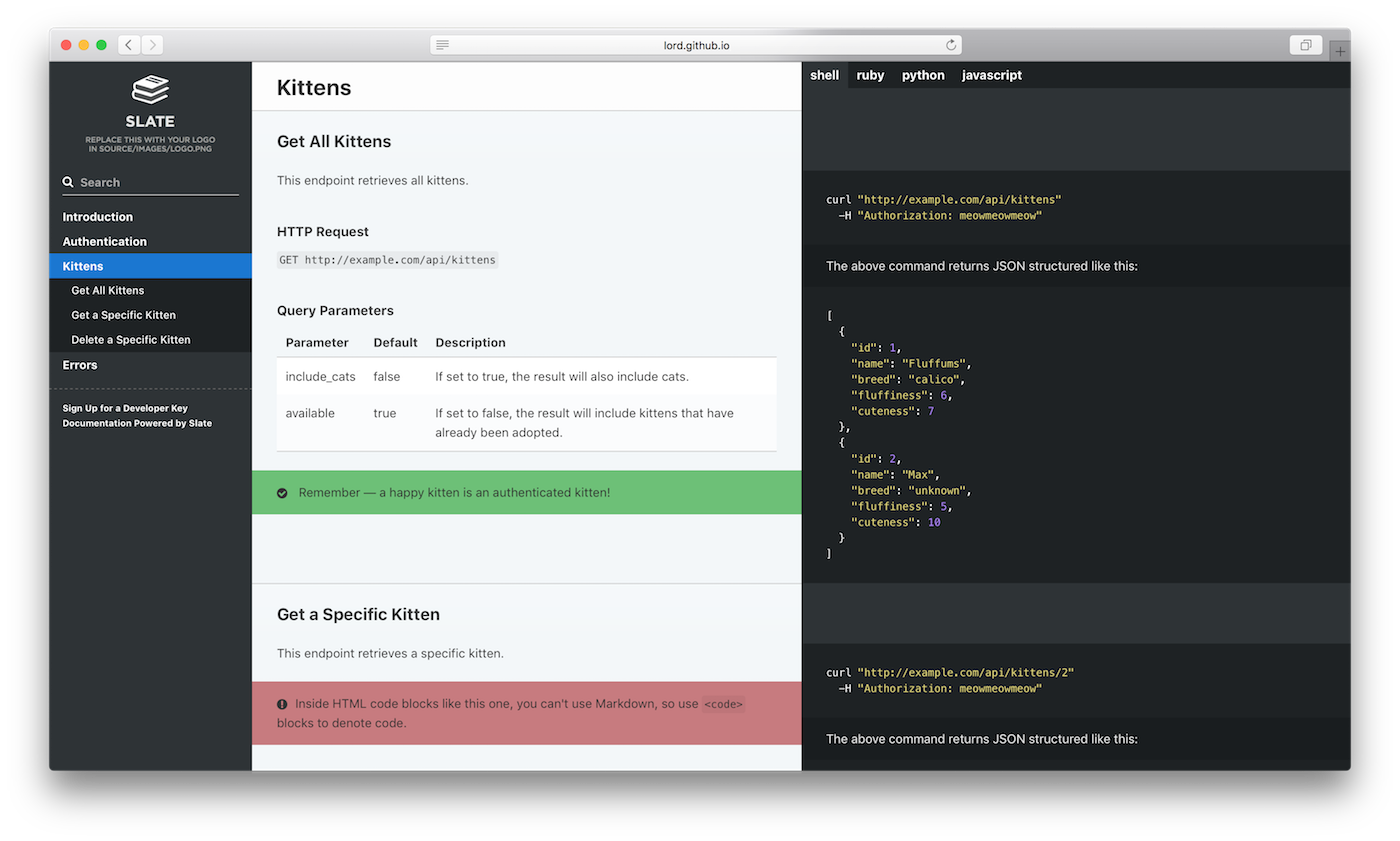 Now, when we include DOC=1 in our test script again Bureaucrat will do 2 things for us:

All that is left to do is rebuilding the slate repo:

You can open up the index.html.md file in the browser and (hopefully) start interacting with your documentation.

To pull it all together

This post got out of hand, but the general idea here is to automate documentation. Helping future developers, particularly yourself, avoid the mundane tasks of updating documentation ensures that those documents stay up to date. Up to date documents ensure that customers and clients can use your services to the best of their abilities, without your business having to handle churn from questions and issues.

As always, feedback is welcome on these posts. If you found anything misleading or confusing please let me know so I can update this post.